The Unexpected was a syndicated radio program from 1947-1948. It ran within a 15-minute slot and its stories were about as long as the Strange Dr. Weird. The show boasted that it featured Hollywood stars... usually that seemed to mean Barry Sullivan, who was the lead in more episodes than anyone.

To explain what I mean, I'll look at the climax of the episode "Birthday Present." All her life, a woman has been given the second-best things in life. For once she hopes her husband might give her the very best by buying her a gold bracelet, but once again she is disappointed - the gift is silver. She decides to exchange it and pay the difference to obtain the gold bracelet, only to learn the bracelet is actually platinum - her husband gave her something even more valuable than gold. She was not given second-best.

That's not an exceptional story, but it's atypical for radio. If that plot had appeared on the Whistler then it would have been much the same - except that the wife would have tried to kill or steal to get the gold bracelet, with the platinum an ironic reveal after her arrest. But the Unexpected has the most unexpected climaxes of all - happy endings! What a concept!

The Unexpected is not a very demanding program - it's short, fast-paced (certainly much better paced than the Strange Dr. Weird) and has an agreeable surprise at the end. It's unpretentious (unlike the very pretentious Diary of Fate). I like it - check it out if you like the Whistler.

Posted by Michael Hoskin at 5:49 AM No comments:

Angola in the Comics #19: Alter Ego

Just before I leave Angola, I thought it was time I visited my blog feature "Angola in the Comics" one more time.

Alter Ego is a 2015 graphic album series which originated in Belgium and became available in English via Europe Comics. This review will be quite unlike my reviews of American comics about Angola; as I've noted before, European creators seem much better informed about Angola than the Americans.

The Europe Comics website states that the series Alter Ego is: "A series conceived in the American style by a team of European creators." Roughly, the series is driven by the idea that people possess a quasi-psychic link to someone else on the planet who was conceived around the same time as they; their lives are entwined and what befalls one may befall the other. 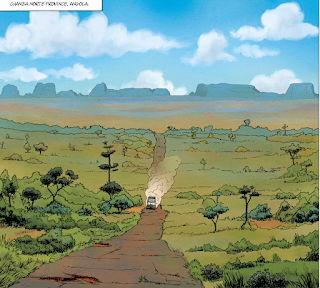 The first book in the series Camille (by Denis Lapière, Pierre-Paul Renders and Mathieu Reynès) is where Angola comes in. This album concerns one Camille Rochant whose mother has just died and left behind a cryptic message which leads her to Angola, seeking ze Texeira, a man who happens to be the same age as her mother; but he's never heard of her mother and has no answers for why she knew his name.

The amount of detail given to the Angola sequences in Camille is excellent - many believable depictions of Angolan buildings and landscapes. It's set primarily in N'Dalatando in Cuanza Norte, but there are also scenes in Luanda at the Hospital Maria Pia. Texeira's background is also steeped in Angolan history - he recounts how he was beaten by the Portuguese in colonial times, then at age 13 went to fight for Savimbi until at age 21 he lost an arm and a leg to a landmine.

I haven't read all of Alter Ego but it's a very dense web - each story features different protagonists entrapped by the same conspiracy and gradually exposing the connective tissue. There may even be more of Angola in other volumes - I hope eventually I get around to reading them!

Posted by Michael Hoskin at 2:47 AM No comments:

Email ThisBlogThis!Share to TwitterShare to FacebookShare to Pinterest
Labels: angola, angola in the comics, comics

My 1 year in Lubango has reached its end; here are thoughts as I head back to Canada.
Posted by Michael Hoskin at 5:10 AM No comments:

Email ThisBlogThis!Share to TwitterShare to FacebookShare to Pinterest
Labels: angola

The Philip Morris Playhouse was a series that ran between 1941 and 1953, but for the purposes of this blog entry I'm looking at the 1948-1949 version. Essentially, the moniker "Philip Morris Playhouse" meant it was a program sponsored by the cigarette company - but the show itself was very different during its run. It first ran in 1941-44 on CBS as a dramatic program like Lux Radio Theater which presented adaptations of popular films, often with the original stars. Then it disappeared until the 1948-49 run on CBS. Finally it ran in 1951-53 on both NBC and CBS as a program centered on adapting Broadway plays.

But the 1948-49 run was different and well worth listening to. Why? Because that season was produced and directed by William Spier. Yes, the same man who made Suspense (also on CBS) one of the absolute finest programs in all of old-time radio produced another program which was very much like Suspense.

Like Suspense, the series featured well-known stars in stories of suspense and danger. In fact, many of the episodes used scripts from Suspense! The Philip Morris Playhouse is basically a trove of lost Suspense episodes... but, sadly, a very small trove. There are only 6 episodes which have definitely survived:

No doubt "Four Hours to Kill" is familiar to Suspense fans just as "The Lady from the Sea" is a familiar episode of the Whistler. For that matter, "Leona's Room" is the same script as the Suspense episode "Pass to Berlin." But among the many lost episodes there are scores of familiar Suspense titles: "The Silver Frame"; "Angel Face"; "The One Millionth Joe"; "The Search for Isabel"; "Banquo's Chair"; "Night Man"; "August Heat"; "The Diary of Sophronia Winters."

The program sounds terrific - it seems to have been blessed with a budget similar to that of Suspense. In addition to the lead stars (drawn from the same talent pool as Suspense) there were plenty of supporting roles for familiar CBS performers like Cathy Lewis. The only aspect in which the Philip Morris Playhouse is inferior to Suspense is in its titular sponsor. The opening theme is unremarkable and the commercials with the shrill "bellboy" Johnny screeching "call for Philip Morrrrrrr-isssss!" grate on one's nerves.

Of the six episodes, Vincent Price was great in both of his and I think they're the highlights of the run - "Leona's Room" is especially good. From the others, "Apology" is a bit offbeat with Elliot Lewis portraying a comedic character in a very grim crime drama. I don't think it's a successful drama but it is interesting to listen to, especially the ending. "The Iron Man" on the other hand is a complete farce, told in a Damon Runyon-esque patter.

I hope more of the Philip Morris Playhouse is discovered in the future - it would be great to hear the rest, especially the scripts that were never repeated on Suspense or the Whistler.

Posted by Michael Hoskin at 5:37 AM No comments:

One last junk food video before I leave Angola -- and this one is the longest by far!
Posted by Michael Hoskin at 3:25 AM No comments:

Email ThisBlogThis!Share to TwitterShare to FacebookShare to Pinterest
Labels: angola

I've made a vlog about Manly Wade Wellman as an introduction to how his background is similar to mine. I hope this is an effective first effort at putting down my impressions of Wellman's work.
Posted by Michael Hoskin at 5:25 AM No comments:

Radio Recap: The Diary of Fate

The Diary of Fate was a syndicated radio drama program from 1947-1948. Every episode is hosted by "Fate" himself, who narrates throughout the drama. Each time, Fate intones how "because of a little thing" the week's protagonist finds themselves drawn into committing a crime but are eventually undone by another "little thing."

I've seen The Diary of Fate called a horror program but that's really not accurate - this isn't Inner Sanctum or the Mysterious Traveler! The presence of Fate as host gives the program supernatural overtones but that's the extent of the program's dip into horror. It's really a crime program and follows in a similar pattern as contemporaneous crime comic books (such as those by Lev Gleason and Marvel) which were also hosted by "Fate."

I find the Diary of Fate was a decent program with some good performers (ie, Howard McNear, Bill Johnstone, Lurene Tuttle) but because it was very formulaic it's not the kind of series you want to listen to very often.

Posted by Michael Hoskin at 2:24 AM No comments: