This week sees the release of volume eight in the hardcover Official Handbook of the Marvel Universe series. I blogged the solicitation on this volume here.
Posted by Michael Hoskin at 11:07 PM No comments:

Email ThisBlogThis!Share to TwitterShare to FacebookShare to Pinterest
Labels: comics, my comics

Road to War of Kings out tomorrow...

Tomorrow sees the release of War of Kings: Road to War of Kings TPB tomorrow, which I blogged about here. It's of interest because it reprints War of Kings Saga, my well-received giveaway from a few months ago. It also collects a few other stories which led up to War of Kings, but...let's be honest. War of Kings Saga is what you really want.
Posted by Michael Hoskin at 10:03 PM No comments:

Email ThisBlogThis!Share to TwitterShare to FacebookShare to Pinterest
Labels: comics, war of kings

There was a freedom to be found in the type of stories told by Atlas Comics in the 1950s that, good or ill, you just didn't see again. Perhaps a good example of this is "The First Rocket!," a story told in Journey into Unknown Worlds#37 (1950) by one of the finest artists of the 50s, Bill Everett.

"The First Rocket!" looks to the future, to man's first landing on the moon. In 1950, this was still in the confines of science fiction. Therefore, by this story it was not until the far-off year of 1963 that man finally set out to the moon. However, our story does not begin there - it starts in 1964 as an unidentified rocket crashes on the Earth.

Surveyors of the crash are startled to find Nazi markings on the rocket. Within the wreck they find the remains of Tex Reynolds, one of the astronauts from the 1963 mission. Tex brought a diary with him and it is from this that we learn the tale. Tex relates his time in World War II and his recruitment into the space program, finally joining the crew who visit the moon. 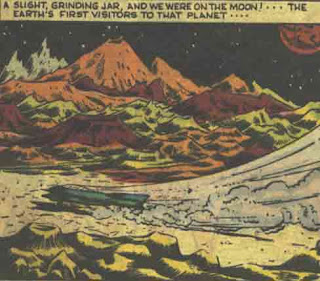 However, something is wrong on the moon. The local Moon Men have been enslaved by humans...by NAZIS! 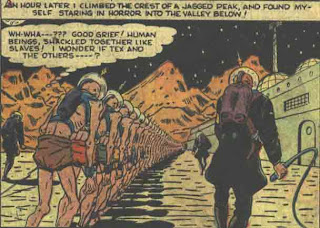 Far-fetched? Hey, it's not as though Hitler is alive... 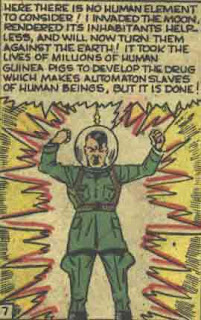 I take it back. Hitler is alive! And on the moon! Yes, Hitler escaped the fall of the Nazi regime by establishing a new empire on the moon, using drugs to bend the Moon Men to his will.

This may seem ridiculous on the face of it, but even today there are certain facts about World War II that some people do not accept; Hitler's possible survival was popular with conspiracy theorists of the day, until something new came along to grab their attention.

Tex manages to escape on a Nazi rocket with his diary, but as previously related he wasn't that good at landing. Having absorbed this missive, the people of Earth react in the only reasonable fashion. BOMB THE MOON! 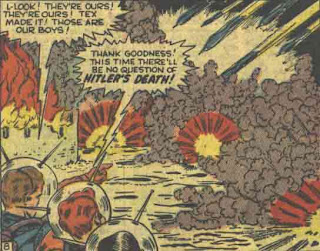 Yes, if you didn't believe Hitler committed suicide in his bunker then you'll certainly believe he was bombed to death on the surface of the moon.

On July 21, 1969, Neil Armstrong was the first man to step upon the surface of the moon. He found no trace of Adolf Hitler.

A link to the past!

My original blog Section 241 is back, thanks to my sister; Section 244 will continue to serve as my main blog, but if I blogged anything worth remembering on the old site, now you can access it as an archive. Enjoy, won't we?
Posted by Michael Hoskin at 4:43 PM No comments:

Email ThisBlogThis!Share to TwitterShare to FacebookShare to Pinterest
Labels: section 241

Although the stories featured in most comics of the 30s to 50s might be termed short stories - as many comics were anthologies with a variety of featured series - many tales averaged 5-6 pages; the rare story might double that count. But today's tale is a mere three pages and it shows how to render an effective story with very little space.

The central figure in the story is called "the Collector" and possesses a unique collection of items connected to murders. As a man stops by for directions, the Collector insists on granting him a tour of the collection. Not all of the items are murder weapons - some were simply in the murderer's possession at the time of the event. As the Collector shows his reluctant guest around he reacts to the news that the man is going to marry Elaine Levitt. 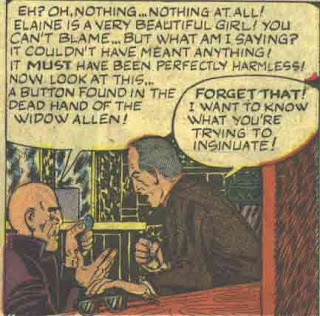 Sure enough, the insinuations are coming. The Collector never alters his severe visage as he makes subtle hints to his guest that he might be too old for Elaine Levitt. 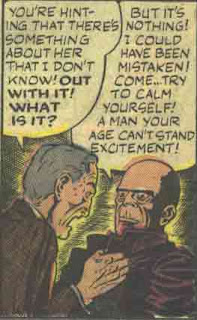 The Collector goes on to relate how Elaine is supposedly involved with a farm hand named Bob Loring. At this, the guest flies into a rage and storms out.

Noticing that his visitor left his glasses behind, the Collector adds them to his shelves. 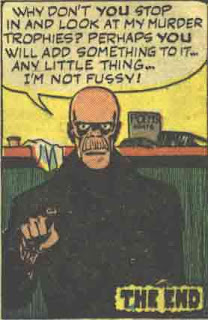 Yes, three pages - and although it is without bloodshed or supernatural happenings, it's the most memorable story from this particular issue of Suspense!

Posted by Michael Hoskin at 10:47 PM No comments:

...The Official Index of the Marvel Universe#5, featuring more of those invaluable sequential guides to Spider-Man, Iron Man and the X-Men! I blogged about it here.
Posted by Michael Hoskin at 9:54 AM No comments:

Email ThisBlogThis!Share to TwitterShare to FacebookShare to Pinterest
Labels: comics, index, my comics 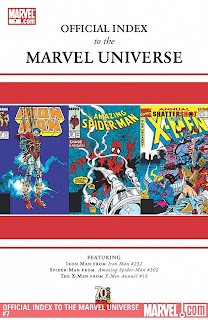 OFFICIAL INDEX TO THE MARVEL UNIVERSE #7
Written by VARIOUS
Continuing the chronicle of the Marvel Universe, starting with Spider-Man (from AMAZING SPIDER-MAN # 302 on), Iron Man (from IRON MAN #231 on) and the X-Men (from UNCANNY X-MEN ANNUAL #6 on). Follow the history of the Marvel universe as it unfolds month by month with the All-New Official Index to the Marvel Universe. Each issue provides synopses for dozens of individual comics, including back-up strips, introducing you to the characters, teams, places and equipment that appeared within, providing vital information about first appearances, where they last showed up and where they appeared next!64 PGS./Rated A ...$3.99 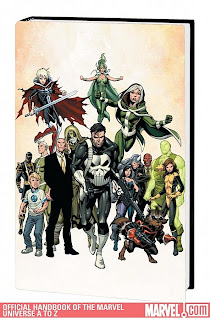 Posted by Michael Hoskin at 2:23 PM No comments:

Looking one weekend back: the Calgary Comic & Entertainment Expo

The 2009 Calgary Comic & Entertainment Expo was the best experience I've had as a guest thus far. I spent the weekend stationed at Another Dimension's booth. Also in attendance there were Riley Rossmo & Dave Casey of Proof and Fiona Staples of Wildstorm briefly joined us on the first day.

I, in turn, was good to them. They provided some shelves of Marvel books I had written and did my best to sell them to passerbys. Although I had a stock of my own books to sell, I often helped people find items which I knew Another Dimension had in stock which really pleased them.

A few of my friends came by; a few mutual friends appeared as well. The most memorable person to visit my table was a boy who identified so strongly with Iron Man that he would claim to be Iron Man. He did share his real name with me, but I was sworn to secrecy.

In all I signed 29 copies of my books. I also signed 2 copies of the convention sketchbook even though I had nothing to do with it.

After completing one sketch of Proof Riley asked me, "How's your lettering?" I replied, "I've never lettered." He returned with, "How's your printing?" I admitted that I could print and he had me provide a speech balloon for the sketch. 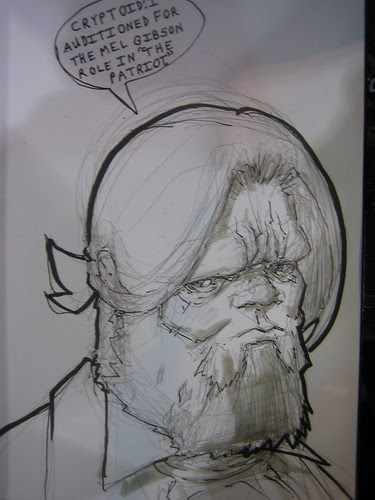 I made a little time to see a few guests whose work really mattered to me; I collected autographs from Bryan Lee O'Malley, Michael Golden and Sergio Aragones. I didn't intend to spend much time or money on product at the show, but the crowd at Another Dimension - particularly Riley - spurred me on as we started informal competitions to see who could find the most interesting/rare comics at the lowest prices. At one point, I unearthed a copy of DC Special#5, an all-Joe Kubert book. When Riley saw it he reached out and grabbed it, creating a brief tug-of-war! It was like something from a sitcom, but Riley relented in my favour (I later gave it to him as a gift). I also bought a page of Riley's Proof art when I saw it had the Ink Monkey; Ink Monkey is my favorite Proof character. I also received a Robocop on a Unicorn sketch from Dave. 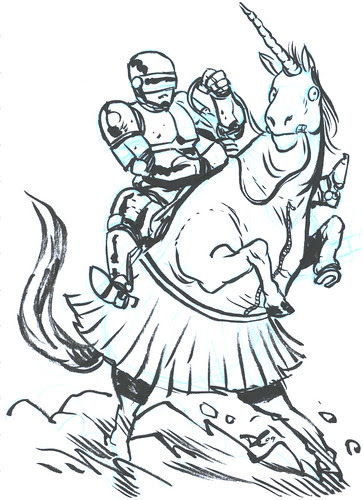 After each day's work I joined the Another Dimension crowd for dinner/drinks, a relaxing way to close each evening.

Posted by Michael Hoskin at 2:20 PM No comments: