Recently on this blog I've been looking back over various old-time radio horror programs which were adapted into comic books during the 1940s; I looked at Inner Sanctum Mysteries, Lights Out and Suspense. The biggest name in old-time radio horror which I haven't looked at yet is The Mysterious Traveler... so let's do that right now! 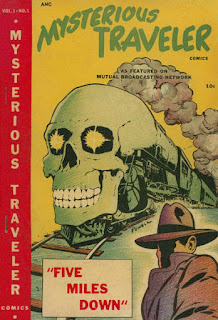 Published in November, 1948, Mysterious Traveler Comics #1 was the only issue of its series published and it was likewise evidently the only comic book published by Trans-World Publications! It's quite a little oddity in comics history, but also something of historical importance in comic book horror - after all, it predates the more famous horror comics published by EC Comics by one year. 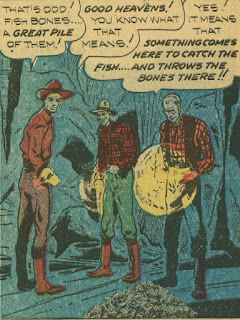 The principal feature in this book is titled "Five Feet Down", drawn by Bob Powell. It's based on an episode of The Mysterious Traveler which had aired on February 9, 1947 and again on July 4, 1950. Unfortunately, both broadcasts are lost, but that just makes this comic an even greater collector's item for fans of the show. Powell depicts the Mysterious Traveler himself as a blank-faced figure (different from the later Ditko visualization, instead reminiscent of Ditko's Question!). The story concerns scientist Professor Dale, miner Tom and geologist Crane, who drill five miles deep into the Earth and discover a subterranean world inhabited by unseen creatures who apparently feed on humans! It's interesting that Powell never depicts the creatures beyond sets of eyes seen watching in the backgrounds. The text describes creatures with wings... it would have been neat to see Powell draw them, but leaving it to the reader's imagination seems appropriate, given the story's radio roots. It's also very interesting how much this story is reminiscent of the still-existing Mysterious Traveler episode "Behind the Locked Door" (first aired May 24, 1949), particularly the scene where the explorers find a pile of fish bones. 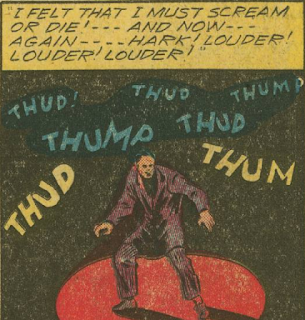 The second story is an adaptation of Edgar Allan Poe's "The Tell-Tale Heart", evidently drawn by Alan Mendel. This story is a reprint from a 1945 issue of Yellowjacket Comics. It's an extremely faithful adaptation with text taken directly from Poe, but the art is quite stiff - it's more like an illustrated story than a real work of comic book art. It's a pity that The Mysterious Traveler radio show didn't do adaptations of Poe the way other horror programs did. 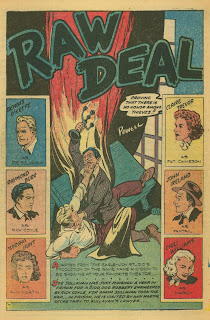 The last full-length story is "Raw Deal", again by artist Bob Powell. This time, strangely, the story is an adaptation of the 1948 crime film. The story draws attention to its roots by listing the cast of the film and Powell does a great job rendering the likenesses of the actors to this comic. It does feel rather odd for The Mysterious Traveler, however - this comic is already a piece of licensing from a radio program, why is it also licensing a major motion picture? The best reason for a comic book to adapt a film is to draw the attention of the film's audience, but the cover doesn't promote the inclusion of "Raw Deal" at all. Also, The Mysterious Traveler was a New York radio show which featured only radio professionals in the lead roles - Hollywood movies aren't an obvious fit for the brand. 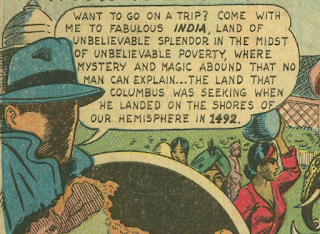 This comic also has three short featurse: a two-page story printed in black & white on the inside front & inside back covers called "The Grand Vizier's Reward" in which an Indian vizier invents the game of chess and tricks his patron into giving him a great reward; there's a two-page text story called "The Mystery of the Five Fingers" which is told by the Mysterious Traveler character; finally, there's an odd three-page feature called "Take a Trip to India" in which the Mysterious Traveler journeys around India, revealing various facts about the country to his readers. Comic books of the time had plenty of non-fiction features like this, but it's strange to see the horror host introducing these facts.

You can read this comic for yourself at The Digital Comics Museum.

Posted by Michael Hoskin at 3:34 PM No comments:

The Benefit of Steel is available in print!

I am very pleased to say that the print version of The Benefit of Steel is now available from Amazon.com. It has already begun selling a few copies; I hope that I have done a fair and readable take on my uncle Steve Foster's life and that this book can continue to find audiences for years to come, just as Sword and Scalpel did for his father.

Born in Canada; raised in Zambia; serving in Angola. Dr. Steve Foster has lived a remarkable life as a missionary surgeon, bringing what he calls "the benefit of steel" to relieve suffering people in times of war and poverty. Steve is one of many missionaries in his family, a lineage with more than 100 years of worldwide service. This is the story of Steve and his wife Peggy and how God shaped their lives for service in Angola, where they have been since 1978. As the Fosters' story is revealed to you in these pages, you will learn the history of Angola and its civil war and witness stories of miracles, dangers and heartbreak.

Posted by Michael Hoskin at 9:49 PM No comments:

Email ThisBlogThis!Share to TwitterShare to FacebookShare to Pinterest
Labels: angola, benefit of steel, books, my books

Some time ago I blogged about the Suspense comic book series which Marvel Comics began publishing in 1949. Only the first two issues adapted stories from the Suspense radio program the title was licensed from and, as I noted, all of the adaptations were taken from scripts written by John Dickson Carr from the early days of the series. 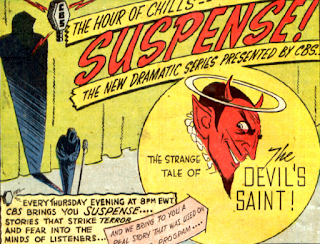 Recently I discovered there was an earlier attempt to adapt Suspense in the pages of Street & Smith's
Super-Magician Comics in 1944. Similar to the adaptations which that series made of Inner Sanctum Mysteries and Lights Out, this was evidently a once-only attempt by Street & Smith to adapt Suspense into a comic book format. The Grand Comics Database doesn't know who created this story. 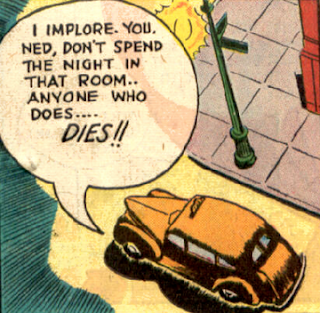 As this was 1944 and Suspense had only begun in 1943, it should be no surprise that they adapted one of John Dickson Carr's stories, as he wrote the bulk of Suspense's early scripts. This time out it was an adaptation of "The Devil's Saint" from January 19, 1943; you can listen to that episode at archive.org by clicking on this mp3 link. The story concerns a young man who is courting the niece of a wealthy nobleman. The nobleman demands the young man spend a night in the notorious tapestry room of his manor, a room whose occupants tend to die during the night. Will the young man be the next victim? 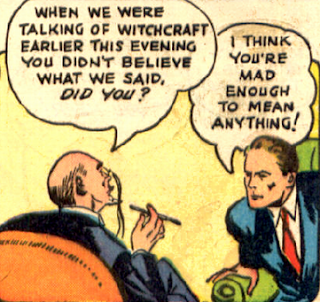 As before when I blogged about the Marvel Comics adaptations of Suspense, I have to point to the quality of John Dickson Carr's writing and the way in which it's adapted into comics format. On the radio, the best thing the story had going for it was Peter Lorre's impressive performance as the nobleman. Lorre's reputation for portraying villains gives the nobleman an assumption of sinister intent - because he is, at the end, a great big red herring. The nobleman is set up as though he's the one killing people in the tapestry room; he talks about the supernatural and his family's belief in witchcraft; all of this is to distract from the real killer, which is the niece. 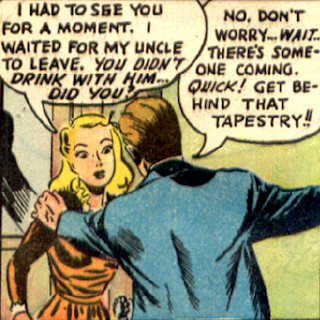 I don't think it's a very good story and the comic book adaptation only highlights the deficiences of the script. Whoever created the comic version didn't put much thought into how to best adapt the story for comics and instead translated the script as closely as possible. For instance, there's a lot of talk about the death of the previous occupant of the tapestry room but no depiction of the dead man; it would have been pretty simple to depict the discovery of the dead man's body while the other characters narrate the events. There are also stilted moments (even more stilted than on the radio) such as when the young man is brought to the tapestry room. In one panel he's talking to the count and niece as the count prepares to show him the room. The next panel depicts the count leading the young man into the room. The following panel shows the woman approaching the young man saying, "I had to see you for a moment." There's no sense that she was absent when the uncle showed him into the room! It's bad storytelling to replicate the dialogue verbatim without guiding the comic book readers through the action of the story. 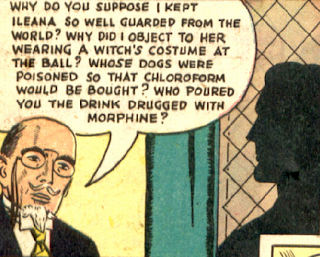 There is, of course, not much 'action' to this story - it's John Dickson Carr. My great beef with his stories is how much time he spends on amateur sleuths making outlandish assumptions about the solution to the mystery as though it represented the conclusions of his audience. Carr wanted to play a battle of wits against his readers, which is fine, but all too often his stories would stop and all-but address the audience as if to say, "Oh, you think you have the story figured out? Watch as I suddenly reveal all these clues I withheld from you until now!" 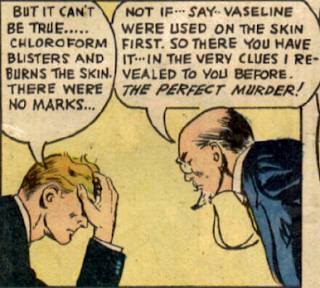 Maybe the low point of this story is when the hero and the uncle are talking about the death of the tapestry room's last tenant; the uncle reveals the man was killed by chloroform, to which the young man reacts: "But it can't be true... chloroform blisters and burns the skin. There were no marks..." This is the first time it's been mentioned that "there were no marks." That's a bad adaptation - based on what's printed here, there's no way the hero should have that much information about the dead man. 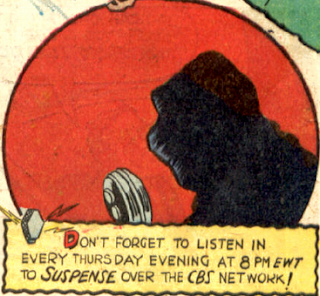 Anyway, the Devil's Saint adaptation is an interesting little curio for Suspense fans out there.

Posted by Michael Hoskin at 4:36 PM No comments:

The Benefit of Steel is on Kindle!

As I continue to work towards the print version of The Benefit of Steel, the biography of Dr. Steve Foster, missionary surgeon in Angola, I am pleased to announce that the ebook text is now available on Kindle: at Amazon.com! Read and enjoy!

Posted by Michael Hoskin at 8:54 PM No comments: