Stan Sakai has been telling Usagi Yojimbo stories since 1984, shifting from publisher to publisher: Fantagraphics, Mirage Studios, Dark Horse and now IDW. I'm not sure why Sakai moved the series to IDW - they had previously published a Usagi Yojimbo/Teenage Mutant Ninja Turtles one-shot. Perhaps the fact that Sakai's old friend Kevin Eastman has been telling Teenage Mutant Ninja Turtles stories there helped entice him. 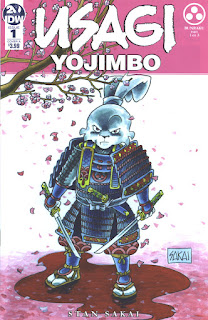 The big change in moving the series to IDW is that it's now in full-colour, whereas previously colour Usagi Yojimbo stories were a rare treat, published as 'color specials' or as original graphic novels. The colour artist on the new IDW series is Tom Luth, who has coloured most of the previous colour Usagi Yojimbo comics, so it's very consistent to the series' standards. It does, however, mean the artistry of black & white storytelling has been lost and the price tag on the comics has been raised. Altogether, I find it a mixed blessing.

Anyway, this new series is opening with a three-part story called 'Bunraku' which sees the return of Sasuke the Demon-Queller, one of my favourite Usagi Yojimbo supporting characters! I had never heard of Japanese bunraku puppet theater, so once again Sakai's story is quite informative about the details. With Sasuke's presence, there are certain to be supernatural problems to bedevil Usagi as the tale progresses. I'm not a fan of the higher cover price, but I'm happy to have more Usagi Yojimbo to enjoy.

Posted by Michael Hoskin at 5:12 PM No comments:

The fatal case of Vertigo

It has recently been announced that DC Comics is closing their Vertigo imprint. Vertigo was, in its heyday, an influential brand within the comics industry. It developed rather organically - although it formally began in 1993, the brand grew in response to readers' interest in 'mature' comics about DC characters such as Swamp Thing, Animal Man, Doom Patrol and Sandman. For most of its first two decades, Vertigo was home to 'mature' takes on unusual DC characters (not the big name characters like Superman, principally those who had supernatural overtones) and creator-owned comics. 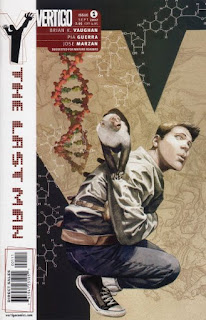 I came relatively late to Vertigo, around the time of what turned out to be their last great renaissance - 2002, when Fables and Y: The Last Man were big hits. Although those two titles went on to enjoy long runs, I started to notice that barely anything else Vertigo launched as an ogoing series had any real staying power. After Y & Fables wrapped, the imprint seemed less and less relevant.

Even before Vertigo runner Karen Berger was shown the door in 2012, DC had already begun moving characters like Swamp Thing and John Constantine back into the DC Universe. They shut down Wildstorm just ahead of their 'New 52' linewide reboot and more and more it seemed as though DC wanted to consolidate their brands and decrease the amount of creator ownership (indeed, apparently post-Berger the Vertigo contracts were much less generous to creators). This is pretty much borne out by the manner in which DC's publisher Dan Didio described how DC would function post-Vertigo:

“We’re returning to a singular presentation of the DC brand that was present throughout most of our history until 1993 when we launched Vertigo to provide an outlet for edgier material,” Didio said. “That kind of material is now mainstream across all genres, so we thought it was the right time to bring greater clarity to the DC brand and reinforce our commitment to storytelling for all of our fans in every age group. This new system will replace the age ratings we currently use on our material.”

Anyway, Berger left in 2012 and her assistant Shelly Bond departed in 2016, so the slow march to dissolving Vertigo has been an open topic of discussion in the comics community for some time. Even laying aside that Berger and Bond are both still working in the industry (Berger at Dark Horse, Bond at IDW) with their impressive rolodexes of talent, for some time now the sort of creators who used to publish their creator-owned material at Vertigo had been headed elsewhere - mostly to Image.

There were a number of great things about Vertigo - for DC as a publisher, it encouraged diversity among the kind of material they published, allowing them to reach audiences with different tastes than their usual super hero fare. It was also a carrot they could offer their big name talent - to keep their creator-owned work with DC and thereby keep those big names from floating to a rival publisher. For the creators, there were advantages to being marketed by DC because the publisher had built up so much goodwill toward retailers over the decades (ie, a DC comic can be expected to keep a reliable schedule; Image comics cannot). And for the industry as a whole, Vertigo encouraged DC to experiment - not simply with 'edgier material' as Didio claimed above, but headier ideas than the super hero genre. 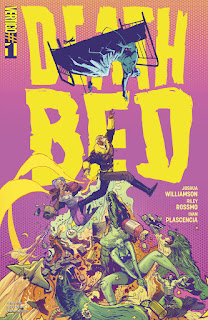 Vertigo has been on its deathbed for many years. It's been so long since there was a real 'water cooler' title that I'm sure a great deal of fandom doesn't see Vertigo's absence as any great loss. It leaves DC a smaller, more creatively inbred publisher, confined to publish almost exclusively in super hero genre books. There may never be another Vertigo; it's hard to imagine today's leading publishers, who look at their holdings as 'IP farms', to allow a place not only to experiment, but to invest time and money into developing a brand with its own niche. Today, Marvel & DC use branding principally as a means to tell readers 'what counts' (their primary super hero universes) and 'what's everthing else' (all-ages, mature readers, non-super hero genre).

Posted by Michael Hoskin at 3:25 PM No comments: