Next January's Handbook is a Blockbuster 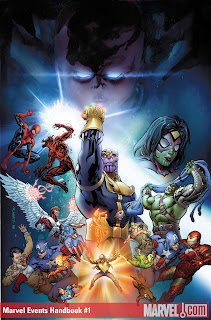 BLOCKBUSTERS OF THE MARVEL UNIVERSE

The chronicle of the Marvel Universe is filled with mind-blowing events — and, in this book, we begin recording them in the Official Handbook of the Marvel Universe-style! Covering events from all eras of Marvel history! The Earth-shaking (The Great Cataclysm! World War II! House of M/M-Day!), the universe-changing (Operation: Galactic Storm! The Annihilation War! War of Kings!) and other significant moments in the lives of your favorite Marvel characters (the Richards/Storm Wedding! Lost in Space Time! Armor Wars!). Plus many more! Featuring new art by Gus Vazquez! 64 PGS./Rated T+ …$4.99

Posted by Michael Hoskin at 5:16 PM No comments: 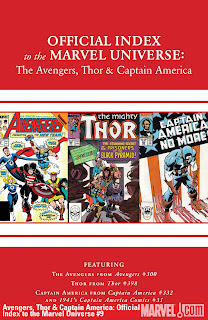 The chronicle of the Marvel Universe returns as the All-New Official Index to the Marvel Universe delves into the history of three more of Marvel’s most enduring titles! Return with us to the Silver and Golden Ages to we launch our coverage of the Avengers (from AVENGERS #300), Thor (from THOR #398), and Captain America (from both CAPTAIN AMERICA #332 and 1941’s CAPTAIN AMERICA COMICS #31). Watch the Marvel universe’s history unfold month by month as each issue provides synopses for dozens of individual comics, including back-up strips, introducing the characters, teams, places and equipment that appeared within, providing vital information about first appearances, where they last showed up and where they appeared next! 64 PGS./Rated A …$3.99

Posted by Michael Hoskin at 5:14 PM No comments:

DC comics: musings from an ex-patriot

I was recently explaining to the owner of my local comic book shop that I would not be purchasing as many Marvel titles as I normally did, but I wanted to ensure that all the independent titles I was following would be in my file. During this he remarked, "now you have more money to spend on DC!"

He said this because he's primarily a DC comics fan. It did cause me to reflect that I had only one DC comic on my pull list: Kurt Busiek's Astro City (technically published by Wildstorm via DC).

I've looked long and hard at DC's current lineup of product to find something I'd enjoy. There are a few titles that I think I would like, but I'm so far behind that it would make more sense to buy the trade paperbacks.

Then again, sometimes the DC trades department is lacking. It recently occurred to me that it might be nice to pick up Jack Cole's Plastic Man, considering how imaginative his artwork was and how I've enjoyed every Plastic Man by Cole I've read in the past. But the only format where DC reprints Cole's Plastic Man is their Archives, which run $75 each! And the first volume is out of print! Forget that noise!

Then I'm looking over DC's solicitations for January to see what I might want to buy when I see there's going to be a Shazam! one-shot. Shazam! was a childhood favourite of mine, second only to Superman, but as a kid it was very difficult to find comics the character appeared in. So, I examine the solicitation:

Blaze, the current ruler of Hell, has an offer for Mary and Billy Batson that may be too good to pass up! Left powerless, will the two former heroes have the strength to deny the devil? Can Freddy Freeman save them? And how does the Titan Osiris fit into it all? Find out here, in this one-shot special written by Eric Wallace (TITANS) with art by Cliff Richards (THE ROAD HOME: BATMAN & ROBIN #1)!

No one wants to buy this comic book. Anyone who does possesses a collector's mindset which "forces" them to support anything bearing the Shazam! logo. I realize I can only speak for myself, but to me Shazam! is a perfect kids comic about wish fulfillment, talking tigers and other things we grown-ups are supposed to have grown out of. Someone at DC knows this because their recent books Shazam!: the Monster Society of Evil and Billy Batson and the Magic of Shazam! were more faithful to the original spirit of Shazam! than anything since the 1970s. But for the most part, DC doesn't want a kid-friendly book, so we've had repeated tales of the Marvel Family being corrupted by power, being unworthy of their power, dumped on by he's-morally-dubious-and-therefore-more-interesting Black Adam, sent to Hell, et al. All for the older, more mature reader who needs at least one dismemberment per issue to justify spending more money in a year on a highjacked children's product than he does on groceries. I'm asking aloud here, can't we just let Baston be Baston? 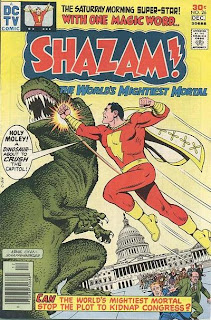 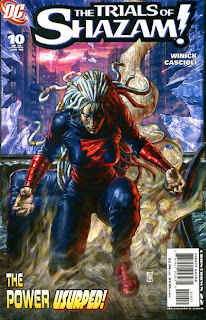 More of this, please: 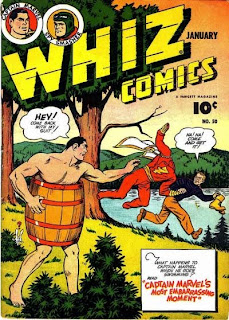 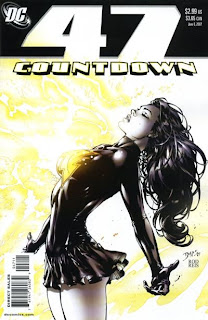 If I were a conspiracy theorist, I might wonder if DC's handling of the Shazam! property since the 70s was deliberately blundered because a directive from on high demanded that the characters be mistreated as punishment for being more popular than any of DC's heroes in the 40s, back when they were owned by Fawcett.

With all the recent shake-ups at DC, there is some hope that change is coming. Bob Harras has been made DC's new editor-in-chief, having been Marvel's for most of '95-00. I bought about as many Marvel books per month with Harras as e-i-c as I did DC books since Dan DiDio became publisher in 2003, so at the very least the statistics say I won't be buying fewer DC books. ...Right?

Then again, as part of their restructuring DC have seen massive lay-offs, including most of Vertigo editorial, sacrificing several editors who produced books I read. They're also eliminating Wildstorm, leaving the one-and-only Astro City's future in jeopardy; well, that is to say, leaving its future with DC in jeopardy; perhaps a year from now I'll be reading Dynamite's Kurt Busiek's Astro City?

I am completely willing to delve back into DC, be it the DC Universe or stand-alone Vertigo titles. All I'm waiting for is for DC to produce something so compelling that I can't wait for it. Well, things are changing at the company; we'll see what develops.

So, this blog has become a very occasional thing for me lately; apologies to anyone who's been dropping by hoping to see updated content, only to be disappointed. I do have plans for this blog's future and hope to get some regular features running.

For now, I will observe that the Inkwell Awards were handed out this last weekend; my favorite inker Al Williamson joined the hall of fame, so thank you everyone who sent in their votes!

Posted by Michael Hoskin at 3:06 PM No comments: