"They've humbly described themselves as the wrath of God by way of loser assassins." Copra #1-3 review

The independant comic book series Copra began in 2012 and word of it began to spread around the internet on sites I frequented. Unfortunately, it had very scarce distribution and wasn't available from my local store, nor on the internet shops I utilized. At last, it is now on Comixology and I've begun to slowly read through (currently through #3). 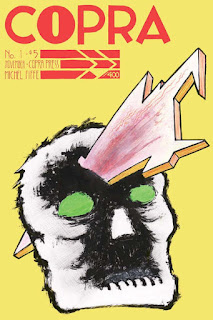 And why should this series interest me so much? I hadn't read anything of writer/artist Michael Fiffe's work before. Quite simply, because it is an ode - an homage - or, if you like, fan fiction - of John Ostrander's 1980s series Suicide Squad.

Although DC Comics is about to launch a Suicide Squad motion picture and have been printing a Suicide Squad comic since the launch of their "New 52," these projects don't have much to do with the beloved Ostrander series. In truth, DC hasn't seemed particularly interested in the series over the years. The Suicide Squad team have appeared around DC almost non-stop since Ostrander's version debuted in 1986. However, since the series ended in 1992, Ostrander himself was only invited back to use the concept again on a handful of occasions and the efforts at reprinting the series in trade paperbacks have been either stalled or cancelled until recently.

Michael Fiffe's Copra, then, is the true inheritor of Ostrander's tales, rather than the in-name-only series currently being printed. Copra is unashamed and unapologetic of its pilfering from Ostrander's work. The mercenaries of Copra include a man with laser-wielding powers who looks a lot like Doctor Light; a fellow from another dimension wears a distortion vest and hairstyle very much like Shade the Changing Man; there's a sharpshooter in red and silver named Lloyd, not unlike Floyd Lawton, Deadshot; there's an amnesiac warrior woman ala Duchess and the squad is led by a heavyset black woman whose assistant is named Flo (deep cuts like Flo & Duchess demonstrate Fiffe has taken the time to absorb the Ostrander run; his Flo even seems to have unrequited feelings for his Bronze Tiger). 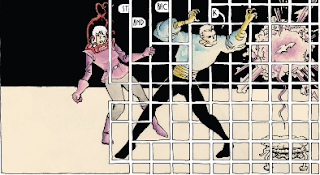 Suicide Squad is not the only comic book referenced in Copra; look-alikes of Marvel's Doctor Strange and Clea guest star in issues #2-3. How does Fiffe get away with it? Well, his copyright identifies Copra as a work of parody so I guess he's safe. But while the internet commenters brought up this series because they thought it was neat to see a Suicide Squad homage, that alone wouldn't secure interest beyond one issue. What makes Copra worth checking out regardless of one's interest in the Ostrander Suicide Squad is Fiffe's own storytelling skills. Here's a guy doing what almost no one in today's mainstream super hero comics can achieve - great fight choreography! 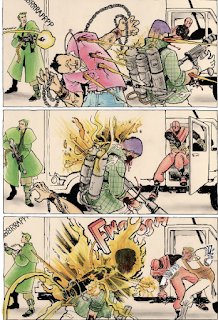 Check out the above page which depicts a killer wielding a flamethrower as he's shot in the first panel. The Copra members continue to act in the background, while the flamethrower explodes. It's simple action--> reaction stuff, but comics have become so unduly obsessed with appearing like motion picture storyboards that these old tricks look startling and new. It is, as Fiffe remarks in the first issue, a series which "taps into the spirit of immediacy, the raw inspired nature of entertainment. Exhuberant, direct, fun." Hear, hear! The mainstream is quickly forgetting everything Kirby, Eisner, Ditko and Wood pioneered; thank goodness the independants are still having fun!

If you liked Ostrander's Suicide Squad, then this is the follow-up project you always wished for. If you haven't, then why not approach Copra as something new, something fun, something to remind you that yeah, this is comics.

Posted by Michael Hoskin at 3:40 PM No comments: