Return with us to the Silver and Golden Ages as the chronicle of the Marvel Universe continues its coverage of the Avengers (from AVENGERS #373), Thor (from 1998’s THOR #1), and Captain America (from both CAPTAIN AMERICA #417 and 1944’s CAPTAIN AMERICA COMICS #35). Watch the Marvel universe’s history unfold month by month as we provide synopses for dozens of individual comics, including back-up strips — introducing the characters, teams, places and equipment that appeared within with vital information about first appearances, where they last showed up and where they appeared next! 64 PGS./Rated A …$3.99

Posted by Michael Hoskin at 4:27 PM No comments:

So, I'm very pleased to note that Proof: Endangered#1 ships tomorrow, promising the continued adventures of John Prufrock, the Bigfoot with a mission! 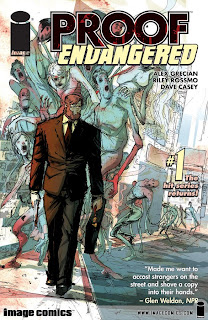 Endangered is setting the stage for Prufrock's exploration of his past, his family and his origins. If you've been following since 2007 (as I have) then you're already hooked! If not, that's what the trades are for! There's a good interview with Grecian found here.

Endangered#1 also features a special biography section written by yours truly; keep your eyes peeled for more bonus features by me in upcoming issues of Proof: Endangered!

And, so long as you're at the comic shop tomorrow, be sure to grab the Official Handbook of the Marvel Universe A to Z Update#5, the last issue of the 2010 series! Learn more about its contents here!

Posted by Michael Hoskin at 4:39 PM No comments: