Digging around Hollywood's pre-code history, it didn't take much to intrigue me about the 1931 film Night Nurse. Here's a sample of Wikipedia's article:

The film contains many pre-code elements, particularly the scene where Stanwyck and Blondell are seen in their lingerie. Gable portrays a vicious chauffeur gradually starving two little girls to death after having run over and killed their sister with his car.

Not that Barbara Stanwyck and Joan Blondell are my favourite actresses, but -- seriously, famous actresses of the 30s in their lingerie? And Clark Gable is vicious, murderous chauffeur? Okay, that sounds interesting.

Be advised, I'm about to spoil just about everything good in this picture. 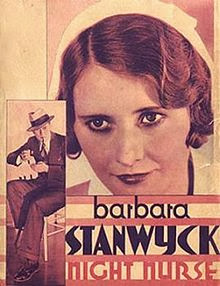 The movie is a brisk 71 minutes, yet takes a while to get around to its plot. It isn't until after the 27 minute mark the film begins establishing its core dilemma and our antagonist (Gable) debuts 35 minutes in. Heck, Gable only appears in four scenes when you get down to it - the real stars are Stanwyck, Blondell and leading man Ben Lyon (only in 1931 could Ben Lyon top Clark Gable!). 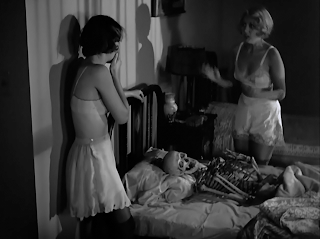 Just looking at the four leading actors brings up some interesting comparisons - Stanwyck and Gable were both stars-in-the-making; Stanwyck was already able to headline a picture and wound up having a career which lasted for decades - 1931 was also the year she made the Miracle Woman, casting her as a duplicitous charlatan, rather than the squeaky-clean nurse she plays here. Gable was a nobody but very soon would become a leading man and ultimately wound up a greater figure in film history than any of the other leads. Joan Blondell was at the beginning of her career in 1931 and burned a tall flame for a while in the 30s, but was basically washed-up by the 40s (though she kept acting to the bitter end). Ben Lyon was the most experienced actor of the foursome in 1931 and was considered a star, yet he washed out even quicker than Blondell and is forgotten today. 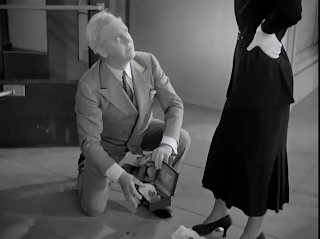 Enough of this. What's the story about? We follow the career of Lora Hart (Stanwyck), a young woman who decides to become a nurse. Although she doesn't meet the hospital's requirements, she befriends the fatherly Dr. Bell, who pulls a few strings to get her in the establishment. Maloney (Blondell) is Lora's roommate and fellow probationary nurse and for a time, the film is like a college drama as the duo have to live on the premises and avoid being caught after partying all night. One one occasion, Lora meets a bootlegger (Lyon) and does him a favour by fixing a bullet wound without reporting it to the police. After all of this foundational work is done, the real story begins: Lora and Maloney are taking shifts at the home of Mrs. Ritchey, a single mother whose young daughters are very ill. Mrs. Ritchey spends her time throwing drunken parties and ignoring her clearly-endangered little ones. Gradually, Lora realizes the mother, her chauffeur (Gable) and even Lora's superior, Dr. Ranger, are involved in a plot to let the children die of starvation in order to access their trust funds. 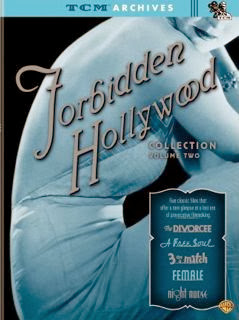 Night Nurse is collected in the Forbidden Hollywood DVDs as a prime example of "pre-code Hollywood." There are, in fact, three scenes where Stanwyck strips to her underwear (in the third, Blondell is also in her underwear and they wind up sharing a bed; it's not as hot as it sounds, sickos). At a time when prohibition was still in effect in the USA, virtually everyone in the film is enjoying their drinks (a little too much in Mrs. Ritchey's home). One of Ritchey's boyfriends tries to rape Lora, but she's saved by the chauffeur - however, when she refuses to give Mrs. Ritchey a stomach pump, he punches Lora in the face, cutting open her jaw. The central plot is, again, a scheme to starve two children to death. Oh, and Lora's bootlegger friend ultimately has some gangster friends rub out the chauffeur (off-screen) - the bootlegger isn't punished for his actions. None of the preceding would have passed muster after 1933 when the Hays Code began to be enforced. 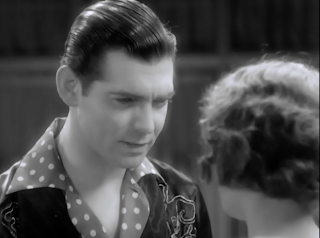 Although it's strange to experience so much of the film before the child endangerment plot begins, I do enjoy the opening 28 minutes - I rather like the lackadaisical approach found in some films of the time where so much care is given to the character's background, such as in Three on a Match or director William A. Wellman's own the Public Enemy from the same year. Watching it, I was kept guessing as to what the real plot of the movie was - are we going to follow Stanwyck & Blondell through their probationary period until they graduate at the end of the film? No, they graduate 27 minutes in. Is Gable's villain going to be established early in the film? No, he shows up 35 minutes in and his scheme isn't even explained until the last 11 minutes - then he dies off-screen! For all the rap the studio system takes for producing cookie-cutter movies, I don't mind these half-typical half-unconventional efforts. The lack of a standard structure might have hurt Night Nurse's position as a classic, but it stands apart today. 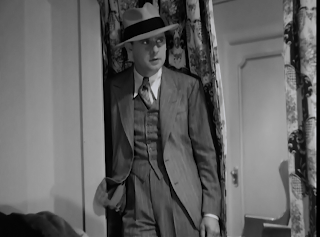 There's a nice bit where Lyon has his hand in his coat pocket and motions at Gable. From Gable's expression you can see he doubts whether Lyon is actually carrying a gun. Lyon responds by tapping his coat pocket against the wall, producing an effectively solid knock. With the "talkies" still being so new in 1931, it's neat to see director Wellman hadn't forgotten how to tell a story visually - Night Nurse isn't just people talking at each other for 71 minutes. 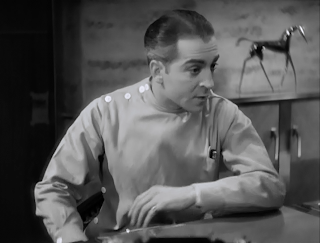 I'm not sure what to make of Ralf Harolde, the actor playing Dr. Ranger. In the two scenes he shares with Stanwyck, he's so obviously evil and corrupt, refusing to acknowledge her warnings about the children's health until it becomes clear he's in on the scheme. Harolde performs all of this with flamboyant gestures and loud ACTING! My first instinct was that he'd just come to pictures from the theater and couldn't act his way out of a paper bag. However, checking his credits, Harolde actually had a lengthy career in film. His Dr. Ranger also had a habit of nervously twitching his eye and sniffing, which at first I took to be flamboyant acting, but I actually wonder (as this is a pre-code film) whether he was attempting to convey his character was a drug addict; it would make his sudden outbursts and paranoid behaviour around Stanwyck a lot more understandable; that's the interpretation I'm going with. 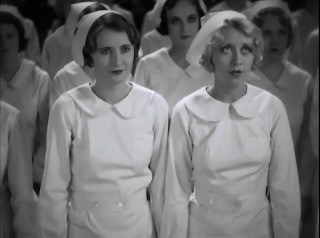 Joan Blondell was pretty cute in her day. Then again, I knew that from watching Blonde Crazy, Three on a Match, Gold Diggers of 1933, the Crowd Roars...

"Only Death Could Bring Them Together." Frankenstein review

At a recent book sale I helped organize and run, I happened across a copy of Mary Shelley's Frankenstein: the Graphic Novel, a 2005 publication by Puffin Graphics. I might have let the item lie right where I found it, but for taking notice of the adapters: Gary Reed and Frazer Irving. 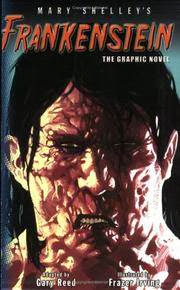 Like so many, my ideas about the Frankenstein story owe more to Hollywood than Shelley's own work. Yes, I've read the original novel, but only once - as compared to the many, many times I've watched James Whale's Frankenstein picture (or any of the other pictures by the likes of Universal and Hammer). Reading the book as a teenager I was amazed at how different the source material was from the films, but reflected a truly authentic film adaptation wasn't really possible - the actual novel isn't big on horror movie thrills and action. 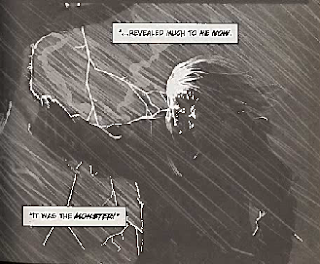 Naturally, comics have certain advantages over film in terms of pacing. This adaptation is extremely faithful to the source material (in fact, they used the same Puffin edition of Frankenstein on my bookshelf!). As in the source material, Frankenstein is the tormented protagonist and his creation is erudite but simply ugly (rather than inhuman). The early chapters concerned with Frankenstein's upbringing are plowed through somewhat more quickly than in the original text, but nothing truly important seems to be absent.

Just one year after the publication of this graphic novel, I first saw Frazer Irving's work in Iron Man: the Inevitable. At a time when so many artists at mainstream publishers were following "house styles," Irving's art stood out for his individuality - his unique style. Subsequently, I was very pleased by his work on the (all too-brief) Xombi and he's been continually making a name for himself in the past two years. Going back to this earlier work, I see a lot of effort in these pages which is, in fact, worth noting. All too often adaptations of public domain works produced by publishers from outside the comics mainstream seem to latch on to artists whose interest in the adaptation is fleeting and it shows in the work. Not so here - Irving's art is limited by the lack of colour, but he does a fine job of visualizing Shelley's book. This isn't one of the works Irving is known for, but I think any fan who tracked down a copy of this book wouldn't be disappointed - he wasn't slumming through this assignment. 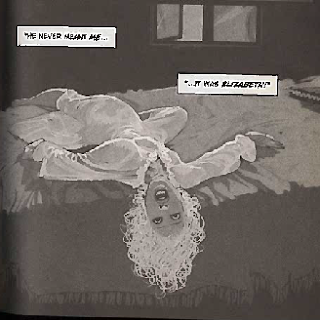 There's also a few special features from Reed and Irving about the making of the adaptation, including a step-by-step process of how Irving creates his art. For an oddity I purchased for a mere $0.50, I've come away with a pretty good little comic to add to my bookshelf.

Posted by Michael Hoskin at 5:06 PM No comments: