In the last two years I've had a great opportunity to expand my knowledge of World War II Canadian comic books - the so-called "Canadian whites." Among those characters I've discovered is Captain Wonder, a super hero who appeared in Triumph Comics stories created by Ross Saakel. 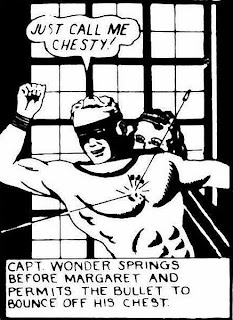 I most certainly will not!

The Captain Wonder series began in Triumph Comics #7 (1942) and you can read the early stories for yourself at the Digital Comic Museum. Our hero's origin is fairly typical for a comic book of the day: a yogi in the Himalayas calls upon the gods of Valhalla to grant their powers to a young Canadian man whom the yogi raised after his parents were killed. Kind of a Mulligan stew of super hero origins. With his newfound powers and the identity of Captain Wonder, the young man returned to Canada to fight crime! 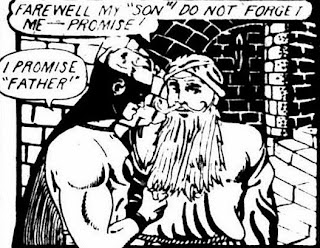 Even they're being sarcastic about these tropes!

Captain Wonder's first adventure pit him against a mad scientist called Frank N. Stein, which may give you some conception of how much care and originality went into crafting those tales. However, that's not exactly what I want to talk about. I'd like to talk to you today about swiping. Perhaps it's not too surprising to begin with Bob Kane - he is, after all, notorious for signing his name to the work of other artists and tracing much of his own work. And yet here, in Triumph Comics#8, Kane was himself swiped by Saakel! 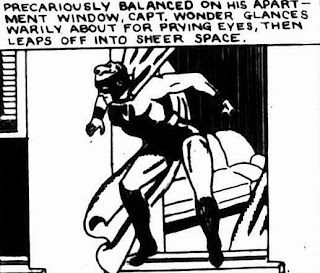 Now this isn't such a terrible swipe - the Batman pose has proven to be a popular one for artists to swipe over the years and considering the conditions artists had to labour under in the 40s, you can't blame them for the occasional tracing.

The thing about Saakel, however, is that he didn't trace occasionally - he traced frequently! 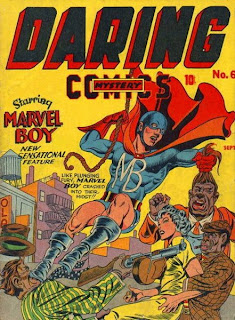 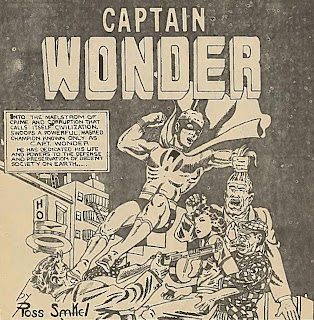 I think Ross Saakel really enjoyed Marvel's Daring Mystery Comics #6, an early Marvel offering with some of Jack Kirby's earliest art for the company. Saakel loved that issue so much that he - well - traced the ever-lovin' almighty out of it! He must have pressed his pencil over the pages so many times they turned back into pulp! Not only did he lift his layouts from Kirby & Joe Simon's cover and interior pages but he also made liberal use of the dialogue! 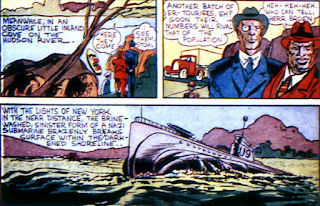 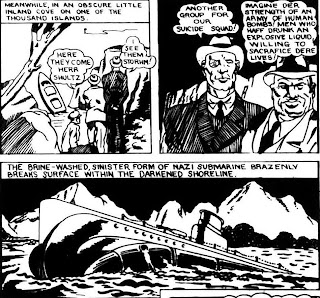 He did, at least swap some names, such as the Nazi spy Stohl being changed to Storhm, while the submarine commander Strohm was renamed Stohl by Saakel. 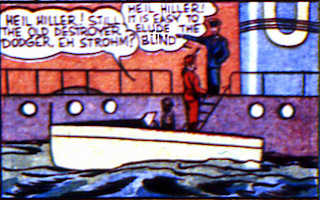 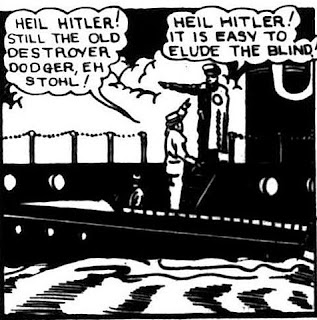 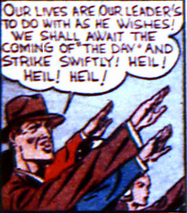 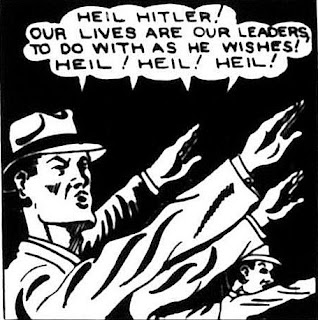 These panels I'm posting constitute only a minority of the Captain Wonder art from Triumph Comics #8, but it's possible there are other swipes I haven't yet identified - another sequence where Captain Wonder attacks a submarine could have easily been traced from a Sub-Mariner comic - not an accusation I'd normally lob at an artist, but with Saakel, the more I see of his work, the more I wonder how much of it was his own work. 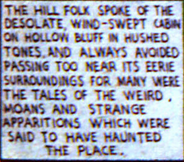 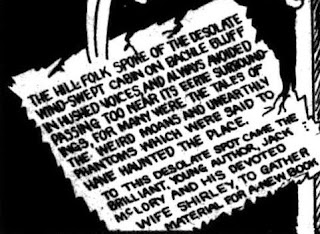 Saakel went on to pen a multi-part story where Captain Wonder battled the Devil himself. However, as you can see by comparing the introductory text above, he again lifted his layouts from Daring Mystery Comics #6 - this time from Joe Simon & Jack Kirby's Fiery Mask story. 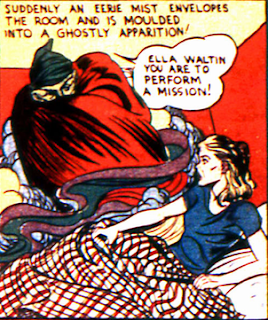 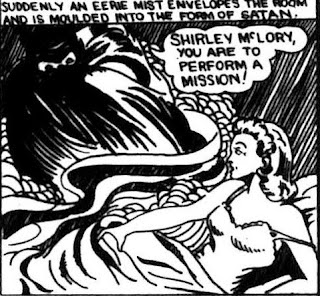 Most of the swipes are found in part one of the story, leaving me again to wonder where Saakel might have swiped the rest of the battle with the Devil from (a Spectre story?). The sheer amount of swipes in this one story is staggering. 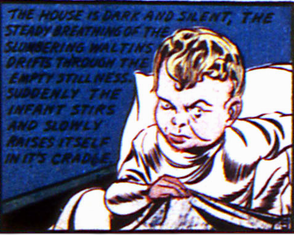 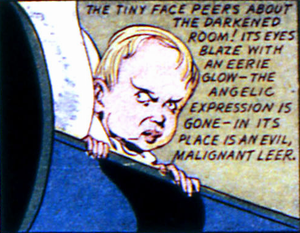 At some point you have to think Bell Features should have cut Joe Simon & Jack Kirby a cheque! Bell Features came into existence in 1941 to fill the gap caused by restrictions on importing comic books from the USA. That means Canadians would have already had a chance to see Daring Mystery Comics #6 for themselves in 1940. Then again, in those days reprints were frequent and not normally identified as such. Is a swipe really that much worse than a reprint? 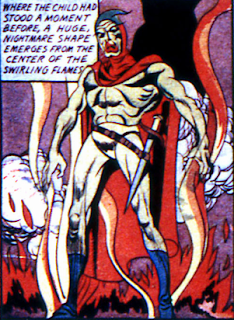 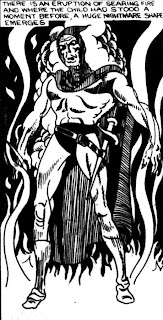 Yes, a thousand times yes! To lift one's plot, layouts and dialogue from another comic book without crediting them was unfair of Saakel to his US counterparts, even if they were much better reimbursed for their work. 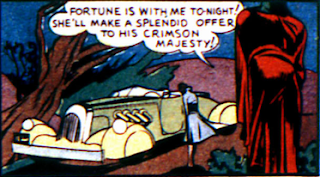 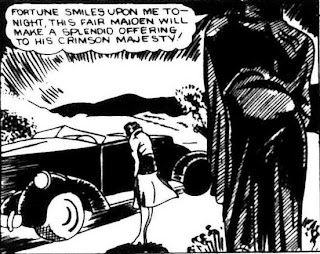 And yet, I'm more bemused than outraged. Saakel lifted so liberally from his copy of Daring Mystery Comics #6 that I half-expected to see a tracing of Stuporman somewhere in Triumph Comics! 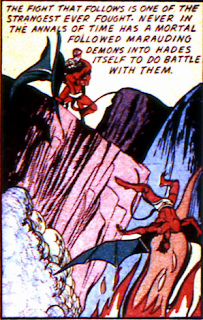 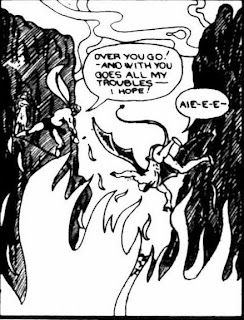 Hey, not every Canadian comic could be as good as Nelvana (Captain Wonder's stablemate at Triumph). Saakel churned out some cheap super hero fare for very little pay and expected his work to be almost instantly forgotten. Between you and I, we've now spent more time considering Saakel's work than probably anyone else in the last few decades. As the history of Canadian super heroes continues to be unearthed and archived, Saakel is perhaps destined to a form of immortality and while he was no Adrian Dingle, he was (probably) not malicious about tracing other people's work. And what better artist to be rediscovered in this age of reboots and relaunches than a tracer? He was into retellings before it was cool!