It seems like you can't swing a spinner rack without hitting some new comic book publisher who materialized from nowhere (and usually soon to return there). One of the newest is Sitcomics, who have an unusal distribution plan where they don't supply their comics through Diamond (the industry's monopoly) and release several issues at once so that readers can "binge" on them.

Of course, "binging" on comics doesn't quite work because readers have to pay as they go - unlike the binge model of Netflix where a one-time subscription gets you all the entertainment you desire (the binge equivalent in comics is Comixology Unlimited). But this doesn't really matter to me so long as the comics are good. 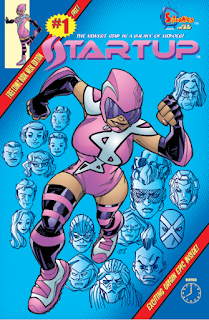 So far the only series I've tried out is Startup (issues #1.1-1.3). It's a super hero comic and exists in a shared universe with another of their books, The Blue Baron. The series is written by Darin Henry (previously unknown to me) and drawn by Craig Rousseau. Rousseau is a somewhat familiar name who has previously drawn books such as Ronin Hood of the 47 Samurai and Perhapanauts. Indeed, generally speaking Sitcomics draws from established artists but with writers who are new to the comics book industry - apparently all having come from the film/television industry. 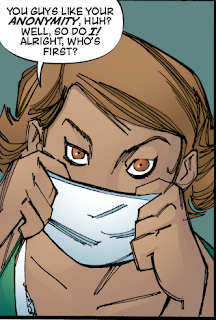 Time and time again I have railed to my friends about how ruining it has been to the comics industry to be overrun with screenwriters who know nothing about comic book scripting. But I'm not going to repeat that rant for you - I am instead going to offer some kudos for Startup. It reads like the kind of super hero comic Tom DeFalco would have published in 1991, and I mean that as a honour. 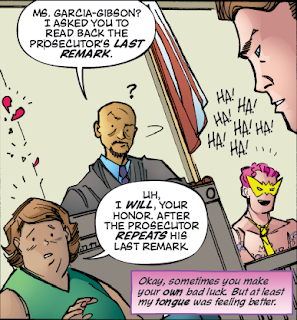 The concept behind Startup is such a pure, Silver Age-flavoured idea. Renee Garcia-Gibson is a 300 pound single mother who works as a court stenographer. After consuming a diet drink which grants her superhuman speed, Renee discovers she can render herself slim and athletic through sheer willpower. Renee adopts the guise of 'Startup' and becomes a super hero, soon finding herself battling super villains and being invited to join the local super hero team. At first she tries to slim down at work so that she can be admired for her figure, but when Startup's enemies threaten her son, she realizes her 300-pound body will have to remain her secret identity.

Part of what makes this such a delightful Silver Age-type comic book are the familiar tropes of super hero fiction being revisited with humour and fun twists. Renee's love interest is handsome lawyer Dawson Miller, but she's blind to the obvious fact that he's shallow. Scenes of Renee crushing on Dawson are gently funny. But one way in which the series offers a fresh take on old tropes are the henchmen who pop up in isuse #1.1: 'The Cloud.' Introduced as 'the Uber for super villains,' the Cloud are normal civilians who put on costumes to help fight super heroes when convenient. It's a sharp, funny idea.

Startup is a fun book in the style of Silver Age comics such as Lee/Ditko's Amazing Spider-Man or Haney/Fradon's Metamorpho. Now that Marvel & DC are primarily interested in deconstructing their tropes, it's fun to discover a good ol' fashioned super hero comic told with wit and heart.