With the debut of Netflix's Iron Fist television show nearly upon us, many people in and about the internet have been commenting on matters of race in the Iron Fist saga - that is, that the hero is, in the comics and on the show, a white guy who gained his powers from an Asian culture.

So, let's begin our history lesson - but first, we'll have to step way back and do some pop culture history.

There is a tradition in fiction of lost civilizations, places which are kept out of reach of modern man. These places may be hidden in a distant jungle, in an underground cavern, atop a high mountain, on the bottom of the ocean or the surface of the moon. Iron Fist's homeland, K'un-Lun, is such a place; it is a city which lies within an alternate dimension and can only be accessed through a portal found in the Himalayan mountains. And so, before we can start talking about K'un-Lun as an appropriation of Asian culture, we have to acknowledge it's actually an appropriation of western culture which could be said to have been appropriated from Asian culture. Er... or something like that. 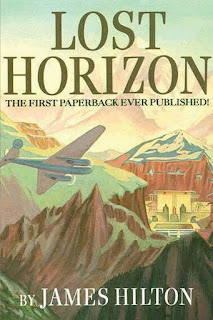 British author James Hilton wrote Lost Horizon in 1933. It tells of a fantastic city called Shangri-La which is virtually hidden in the Himalayas and unknown to the world at large. Shangri-La is a paradise of knowledge and is used in the novel (and 1937 film adaptation) as an escape from the punishing realities of contemporary times - the idea that even if western civilization perished in World War II, humanity's knowledge would be maintained in the yet-peaceful land of Shangri-La. The only truly fantastical element in the novel is that people in Shangri-La have extraordinarily-long lifespans but outside the city's borders age rapidly. And so, K'un-Lun is likewise a remote Himalayan retreat which, nevertheless, boasts a surprising understanding of the western world - Lost Horizon was an extremely popular book in its day and was remade as a (terrible) film in 1973, a year before Iron Fist's debut. Yet Hilton had himself based Shangri-La upon a pre-existing city in Asian lore: Shambhala, a Tibetan kingdom which was likewise a repository of knowledge ruled by the wise and just. But K'un-Lun owes a debt to more than simply James Hilton and Shambhala. 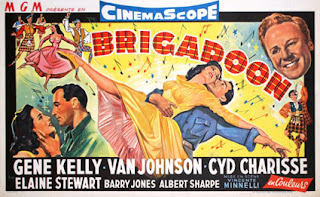 I suppose we also have to talk about the 1947 musical Brigadoon by the American Alan Jay Lerner. It's the story of a Scottish village which appears for only one day every 100 years. Similarly, K'un-Lun appears on Earth only once every 10 years. It feels as though one of the reasons K'un-Lun had that restriction was because the initial creators (Roy Thomas & Gil Kane) didn't believe Iron Fist would ever be returning there after his origin. Besides Brigadoon, you can see many ideas from Scottish/Irish/English folktales about fairies in the concept of a place which is sometimes there, sometimes not and where time does not necessarily pass at the same rate.

#2: The Hero Who Journeys to the East 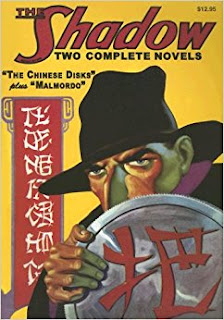 The super hero genre owes a tremendous debt to the pulp magazine hero the Shadow, who directly inspired many of the earliest comic book heroes. In the radio version of the Shadow, he bore "the hypnotic power to cloud men's minds so that they cannot see him," which was a secret he learned "many years ago in the Orient." Well, that set off a mawkish band of imitators. According to the resources of my friend Jess Nevins, some early comic book heroes whose origins consisted of brushing up against the mysticism of "the Orient" (usually Tibet) includes: Thin Man, the Vision, Howard Thurston, the Green Lama, Wonder Man, Thun Dohr, the Human Meteor, Illuso, the Flame, Gun Master and Commando Ranger. But, most significantly, there was Amazing-Man. 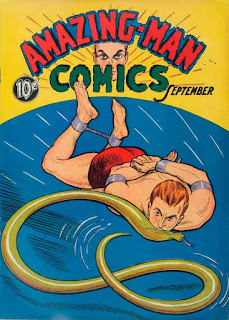 Amazing-Man was created by Bill Everett and published by Centaur starting in 1939's Amazing-Man Comics #5. In that comic, we were first introduced to John Aman, an orphan who was selected for his "superb physical structure" and brought to the Council of Seven in Tibet. Said Council was comprised of men in hoods not unlike those of Iron Fist's uncle Yu-Ti (and one of the Council is a heavy, much like Yu-Ti). The Council gifted Aman with "kindness, tolerance and bravery" and set him through a barrage of tests where he had to be strong as an elephant, quick as a cobra, survive being stabbed with throwing knives and prove himself adept at various languages. Following this, one council member injected Aman with a serum which permitted him to become invisible while generating a green mist around his body (hence his other alias, "The Green Mist").

Roy Thomas, being quite the fanboy, deliberately cribbed many details from Amazing-Man's origin for Iron Fist. At the time, the old hero-goes-to-the-mysterious-east origin was mostly neglected, although the 1960s had included a few notable heroes in that mould such as Doctor Strange, Doctor Droom (later Doctor Druid) and Deadman. You might be surprised to hear that Batman was not one of these heroes at the time; it wasn't until a fill-in story written in 1989 by Christopher Priest that Batman's origin was altered to include a trip to Tibet - a detail which would subsequently become quite visible in the 2005 film Batman Begins. 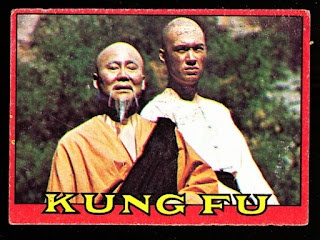 Next up, we have to talk about the martial arts film phenomenon. By 1974 it was a big business, coming one year after Bruce Lee's Enter the Dragon, which became a major point of reference for martial arts films in popular culture. More than that, there was the television program Kung Fu starring the not-at-all-Asian actor David Carradine. Kung Fu brought the martial arts craze into living rooms across the USA, including those of Marvel Comics' creators. Steve Englehart & Jim Starlin lobbied Roy Thomas to obtain the license for Kung Fu but Thomas noted the series was owned by Warner Bros., owners of their rivals DC Comics; instead, in late 1973 they debuted the new Marvel series Master of Kung Fu featuring as protagonist Shang-Chi, whose personality and ethos were roughly based on that of Kung Fu's Kwai Chang Caine.

Gil Kane said that Iron Fist came about after he saw his first kung fu movie. He was instantly jazzed about creating a kung fu comic book series himself and this led to him joining with Roy Thomas. Therefore, we can trace the lineage of Iron Fist thusly: Kung fu movies -> Amazing-Man -> Lost Horizon -> Shambhala.

However, Iron Fist faltered somewhat shortly out of the gate. Kane was interested enough in the martial arts to draw the first issue, then he jumped off. Larry Hama stepped in for four issues as the new artist, while Len Wein and Doug Moench became the writers. Tony Isabella & Arvell Jones covered only three issues, then after two issues by Chris Claremont & Pat Broderick, John Byrne took Broderick's place and the Claremont-Byrne team became the longest-lasting Iron Fist creative by a country mile.

Due to the immense upheaval, Iron Fist didn't quite gel as a series until the Claremont-Byrne days. The initial storyline dealt with Iron Fist's origin, then his quest for vengeance against his father's killer. Isabella & Jones shook up the concept a little by introducing the idea that K'un-Lun could be reached at other intervals through magic, setting the stage for many of Iron Fist's return visits to the extent that K'un-Lun's supposed disconnection from Earth would become largely forgotten. 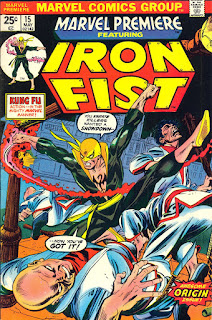 "But Mike," you say, "this is all very interesting and well-researched but you're dancing around the real issue: Iron Fist is just another Mighty Whitey." I appreciate the compliment, but I do prefer "Michael." I won't argue the point of Iron Fist being a Mighty Whitey; like many of those to whom the trope applies, he's a white guy who travels to some remote place inhabited by non-whites, then proceeds to be better at whatever it is the locals specialize in than any of them. Sure enough, Daniel Rand is raised in K'un-Lun from approximately ages 9-19 and succeeds at every trial placed before him (just like Amazing-Man), claiming the power of Iron Fist.

Yet if you had asked me about Danny's race 10 years ago, I would have told you he's half-Asian. And 10 years ago I wrote for The Official Handbook of the Marvel Universe, so that would have been a rather authoritative declaration.

Here, let's go back to Danny's origin again; what is often overlooked in the origin story is that Danny's father originated in K'un-Lun. As narration in Marvel Premiere #15 puts it: " Even as a child, you knew your father had always been an enigma to everyone! Appearing out of nowhere, nearly a decade before -- becoming an instant entrepreneur, with mysterious funds" Then in Marvel Premiere #16, K'un-Lun's ruler Yu-Ti, the August Personage of Jade, reveals Danny's father Wendell was his brother - making Yu-Ti Danny's uncle. Therefore, Danny's lineage is half-K'un-Lun! That seems pretty conclusive, huh? Danny's 50% Asian, which mitigates all that 'Mighty Whitey' stuff. Danny's full name would even be given as "Daniel Rand-K'ai" on occcasion (usually in the OHOTMU). It seems as though Iron Fist's creators intended for Danny Rand to be half-Asian! 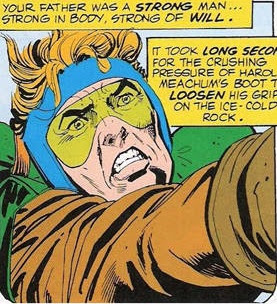 Of course, Gil Kane didn't drawn Wendell Rand to look Asian. You could chalk that up to an art error if you really wanted to. Later, in Power Man & Iron Fist #75 (1981), Jo Duffy suggested Wendell had been adopted into Yu-Ti's family but it didn't catch on, nor did it make sense based on anything previously established about Yu-Ti. But, unfortunately, Ed Brubaker & Matt Fraction's Immortal Iron Fist undid these little-explored fine details. Immortal Iron Fist kinda makes the 'Mighty Whitey' thing even worse by introducing Orson Randall, the previous Iron Fist, who was also a white guy who wound up in K'un-Lun. For a character who died within six issues he's actually got a backstory which is just as convoluted as Danny's. Brubaker & Fraction did at least introduce the idea of K'un-Lun possessing various sister cities which each had their own champion or "immortal weapon;" most of those immortal weapons were Asian guys (one of them was Amazing-Man, who had fallen into the public domain). 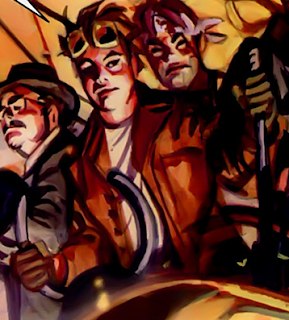 So it was that in Immortal Iron Fist Annual #1 (2007), Brubaker & Fraction established Wendell Rand as an All-American orphan kid who met Orson Randall and through him, eventually went to K'un-Lun and became a citizen. So, there was a perfectly acceptable means to firmly establish Iron Fist as one of Marvel's most prominent Asian heroes, but they went the opposite direction. Thanks for ruining it, white guys.