I'm nearing the end of Dracula Month so let's have a little fun; turning to comic book publisher ACQ I'm going to examine Adventures into the Unknown #29 (1952) and the story "Invasion of the Ghost-Monsters" by artist Ken Bald (writer unknown). 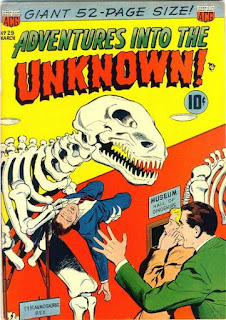 In this tale the wealthy eccentric Silas Inwood has died and in his will charged his nephew Barry with writing his biography. Barry and his fiancee Fay follow the instructions and after adding a copy of Silas' biography to Silas' library they have to perform an incantation to complete the will's conditions. The spell causes Silas' ghost to appear, his spirit having lived on through the pages of his biography. Silas intends to conquer the world with an army of ghosts conjured from his library, including the likes of Captain Kidd, Jack the Ripper and Dracula. Dracula is given the job of guarding Barry & Fay while the other ghosts rampage through the city. Barry defeats Dracula by forming a cross to drive him away, then he conjures up literary heroes such as Paul Bunyan and Robin Hood to defeat the evil ghost monsters and Silas' wife Martha emerges from the biography to force Silas back into his rest.

This is an utterly ridiculous story. This is a story where a ghost delivers a ransom demand to the mayor over a telephone. It's the kind of glorious stupidity which gave comic books their reputation as trash. But how does Dracula fare? Although he makes a poor showing against Barry, he receives more attention than any of the other ghosts. That 'Dracula' name gets you respect, my friends.

The concept of literary characters having life because of people's belief in them would later be mined for a good seven years in comic book form via Mike Carey & Peter Gross' The Unwritten. You can read "Invasion of the Ghost-Monsters" for yourself at the Digital Comic Museum.

Posted by Michael Hoskin at 6:00 AM