However, I had another goal in mind: to index a comic book from Angola. As I attempted to explore what was out there, it was a tricky proposition; on my visits to Angola the only place I saw was Lubango and the few comics I did manage to find were from Portugal. Much of my research indicated that what few comic books were published in Angola during their years as a colony ceased when Portugal left and the civil war erupted (people obviously had higher priorities than publishing comic books). 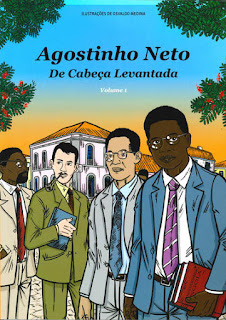 But with the war long over it's a bright new world. At last, I learned of the recent publication of a series of graphic novels recounting the life of Angola's first president, Agostinho Neto. As I was passing through Luanda on my most recent visit, I thought I could enlist some local help in obtaining a copy - but, to no avail. Three of the series' four volumes were available at the time, but they couldn't find any of the books for me. Finally, I located the first volume 'De Cabeça Levantada' being sold at Amazon by a vendor from Portugal and bought it. It took a few years of research, but I still wound up being the first person to index a comic book from Angola for the Grand Comics Database. here's the entry.

This comic was created by artist Osvaldo Medina and covers Neto's life up to 1961... kind of. The narrative jumps around quite often, sometimes venturing back centuries to the Portuguese's first arrival in Angola, then leaping ahead to the 1970s. You would think that as a biography it would be a very straight forward affair, but the story is constantly interrupted to explain certain historical details surrounding the various political institutions concerned, about why particular conflicts erupted over long-standing issues, how Portuguese political policies had been shaped across several decades, etc. It's a little unfortunate because it takes the focus off of Neto. The details are fine, but I feel the book would have been better served by being broken up into chapters so that those portions not directly about Neto were identified in the text as being somewhat parenthetical.

As a publication of Fundação Dr. António Agostinho Neto the book also feels a little bit like propaganda, especially when it jumps ahead to celebrate Neto's presidency rather than hold back on that development until a more appropriate time in the later volumes. The formatting of the comic is also crude, with all lettering done in the same computer-generated font and very little presented as dialogue balloons in text. In all, this is primarily a textbook, not a novel. Still, it was good practice for my developing Portuguese and I learned a lot from it. Altogether, it was good for me as a student of Portuguese, an avid learner about Angola and researcher on international comic books.

Posted by Michael Hoskin at 8:15 PM