"The Lake" comes from the early part of Bradbury's career, the time in which he became a teller of weird tales (often for Weird Tales), the time of shocking climaxes and malevolent forces of horror. However, even in that period he was telling personal, poignant tales of loss; such a tale is 1944's "The Lake," the story of a little girl's death and its haunting after effect. 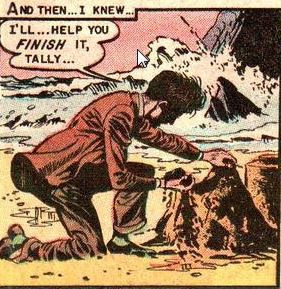 In 1953 Al Feldstein & Joe Orlando adapted it perfectly for EC Comics. The imagery of that adaptation is burned into my recollections of this story, particularly the image of the lifeguard carrying the girl's body and of the man building a sandcastle. 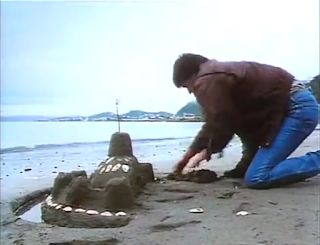 In 1989, The Ray Bradbury Theater produced its own adaptation and did a fine job with the morose material. On the occasion of Ray Bradbury's death when I wondered how to put into words my sense of loss - losing an author whose work meant so much to me - I was instantly drawn back to "The Lake," a story of those who have gone and what they have left behind for us.

Posted by Michael Hoskin at 5:00 PM