Ray Bradbury wrote what he knew. Perhaps not so much where dinosaurs, time travel and Mars were concerned, but he wrote from personal experience (hence the many Irish stories inspired by his time in Ireland) and personal observation. Not being a driver, he relied on his own two feet to get him around much of the time. This led to the incident which inspired his 1951 short story "The Pedestrian." A policeman once stopped Bradbury to question him, as though his walking around made him suspicious. Although nothing came of it, Bradbury was outraged by that slight on his standing as a good citizen. 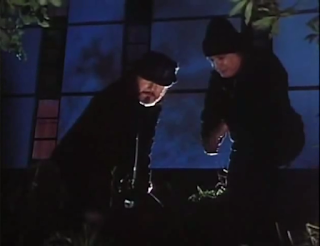 I can relate; like Bradbury, I don't drive. On two occasions, I have been stopped by the police while out walking and asked to justify where I had come from and where I was going. Like Bradbury, nothing came of it. In "The Pedestrian," however, Bradbury imagines a future dystopia not unlike Fahrenheit 451 where people are confined at night by curfew; one man who breaks curfew is arrested for that crime. The 1989 Ray Bradbury Theater adaptation expanded it somewhat with David Ogden Stiers as the pedestrian, but in this case he invites another person to join him as he walks, to broaden his friend's horizon by showing him the world outside. Bradbury looked at a world where people longed to be indoors, watching their televisions and being told what to think; he much preferred to be outside, to be thinking and feeling about the world around us.

Posted by Michael Hoskin at 1:14 PM