Welcome to the final day of a month with Ray Bradbury!

To close my look at adaptation of Bradbury's stories in other mediums than prose, I'm turning to one of his earlier horror stories, "Skeleton" from 1945. It's an odd little tale about a man who is afraid of his own skeleton and fears his very bones are plotting against him. It's kind of wonderful and kind of disgusting. Perhaps the best passage comes from a fat man whom the lead character idolizes:

"'Layer by layer,' said the fat man, 'twenty years, man and boy, I built this.' He held his vast stomach like a globe of the world, teaching his audience its gastronomical geography. 'It was no overnight circus. The tent was not raised before dawn on the wonders installed within. I have cultivated my inner organs as if they were thoroughbred dogs, cats, and other animals. My stomach is a fat pink Persian tom slumbering, rousing at intervals to purr, meow, growl, and cry for chocolate tidbits. I feed it well, it will 'most sit up for me. And, my dear fellow, my intestines are the rarest pure-bred Indian anacondas you ever viewed in the sleekest, coiled, fine and ruddy health. Keep 'em in prime, I do, all my pets. For fear of something? Perhaps.'" 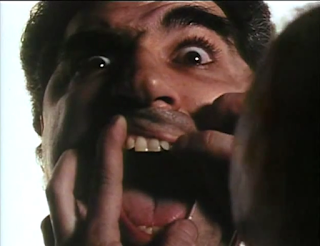 In 1988 The Ray Bradbury Theater presented "Skeleton" as one of their best adaptations with Eugene Levy as the protagonist. Levy truly sells the concept - you believe he would be afraid of his skeleton. And the inexplicable oddness of the story remains faithfully weird with the "jellyfish" done as best as a television budget could permit. 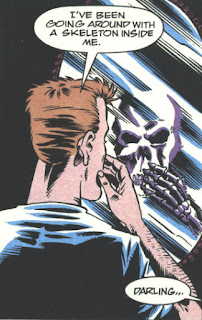 It's a shame EC comics never adapted "Skeleton" - it was very much in their wheelhouse. However, Topps brought it to the comics format in 1994 by John Carnell & Anthony Williams. Again, a very faithful adaptation and the climax depicted just right.

Thank you, dear reader, for indulging me in this personal journey through the stories of Ray Bradbury and their adaptations. Have a very happy Halloween!

Posted by Michael Hoskin at 2:27 PM