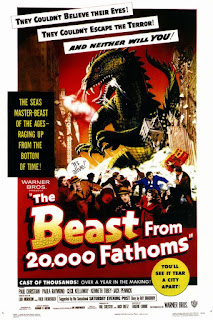 The Ray Bradbury story we know of as "The Fog Horn" first appeared in 1951 under the title "The Beast from 20,000 Fathoms." The 1953 motion picture of that name was being developed at the time the short story was printed and a deal was struck between the filmmakers and Bradbury to use elements from his story in the movie. "The Fog Horn" tells of a lonely prehistoric creature which is drawn toward a lighthouse by a fog horn, thinking it has found one of its own kind. The film Beast from 20,000 Fathoms, which represents one of the first film works to draw from Bradbury's imagination. Although the film took very little from his story, the scene where the creature enacts the events of "The Fog Horn" is easily the most poignant moment. Of course, The Beast from 20,000 Fathoms became immensely important in the lore of movie monsters as it led to a certain Japanese lizard by the name Godzilla.

In 1993 Topps Comics had artist Wayne D. Barlowe paint an adaptation of "The Fog Horn." Barlowe's adaptation is not entirely comics - it reads like an illustrated text story - but it's very beautiful art. In this tale, rather than a four-footed land creature, the lonely dinosuar is rendered after that of a pleisiosaur, inviting friendly thoughts of the Loch Ness Monster.

Posted by Michael Hoskin at 9:13 PM